Highest Mountain Hike in Europe or Highest “snow-free” Mountain in Europe.
This is how the Barrhorn summit is often described. What does it really mean ?
Barrhorn summit claims to be the highest mountain in Europe which is “snow-free” during summer and can be ascended via the normal route by an experienced hiker without any climbing gear. I have came across this mountain while searching the web for a summit over 3000 which can be ascended in 1 day without previous mountaineering experience and without crossing any ice/glacier.

One of the biggest problem was the distance. I was about 300km away from the starting point of the north Barrhorn route. After a short research stage (about 2 hours) I decided that there is a slight chance to climb Barrhorn in a single day if I get up early enough and the weather will allow the ascend. I was lucky with the weather, reached the summit at about 16:00.

I want to point out here, that this is NOT how the ascend should be done. The ascend need to be started early in the morning to get to the summit much earlier than at 4pm. The weather in the mountains usually gets much worse in the afternoon so being at 3610m attitude at 4pm and having at least 3 hours to the hut is not a good idea unless you are really well prepared.

In order to reach the Sänntum car park you have get to Oberems, follow the road to Gruben and continue driving until you get to a small bridge crossing the river. This is where the public road finishes. You cannot go any further. There isn’t really a car park here, the cars need to be parked along the road.
I have arrived to the end of the road at about 10:00 and started my hike choosing the path on the right. The sign indicated 2h to the Turtmann Hut. I knew that I had very little time so I pushed hard and reached the hut after 90min. I had enough food for the tour in my backpack but no thermos with hot tea. Knowing that I might not eat or drink anything warm for in the next couple of hours I decided to try the homemade Goulash soup. It was delicious and gave me a kick to start the ascend to Barrhorn. 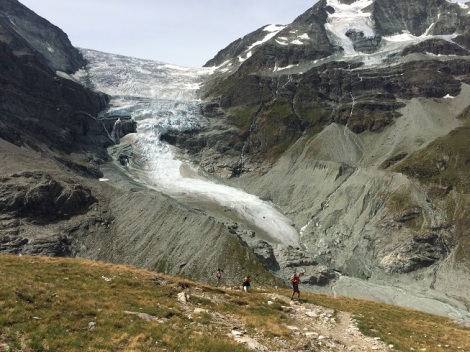 The route to Barrhorn is quite well marked with white-red-white strips painted on bigger stones and cannot be really missed in good weather. After leaving the hut a narrow path leads to steep rocks where a short via ferrata brings you to a higher level. It is one of the most interesting parts of the route and gives a small kick of adrenaline… The weather was quite good, not too sunny with light wind and I reached 3200m with shorts and t-shirt. After that the sky got more cloudy and a quite strong, cold wind start to blow. I changed my shorts into hiking pants and put long sleeve on. After another 200m hight I had to put my jacket on and really regretted that I left my gloves at home….

View towards the Turtmann Hut

After passing the short via ferrata. Turtmann Hut in the background

Time for the soul. Let the body rest for a while…

On the way to Barrhorn

On the way to Barrhorn

There were astonishing views on the way to Barrhorn but the Barrhorn was still not visible. The mountain is so flat that you see it first when you get really close to it. But finally I saw it in a distance. Seeing the summit makes you happy but you also realize how far it is still from the point you are admiring it. For me it was time to make the decision. It was 15:00 and still about 1 hour to the summit. A pretty steep ascend… I had enough strength and the weather was still ok so I continued. The last part of the route was very steep and exhausting… I had to stop couple of times to take a deeper breath.. but I finally got to the top! I reached the summit at 4pm which is very,very late… I should be back in car by now or at least at the Turtmann Hut and not at 3610 attitude!
The clouds in the distance looked like it could rain within the next hour and there were some tine snow flakes falling from the sky. It was certainly the time to leave… The weather kept good until I reached the hut and there was only light rain which started about halfway from Barrhorn to the Turtmann Hut. I arrived at the hut at about 7.15pm where I had hot tea and continued descending until I reached my car at 8:30pm. I made it… I was back on the flat land…From here it only 3 hours drive home…

View from Barrhorn towards Zermatt